Up, Up and Away – Inflation update

Inflation in the US has just reached its highest level in 13 years, the consumer prices index jumped by 4.2% in the 12 months through to April, up from 2.6% in March (please see graph to the right). This has caused markets around the world to slump on worries that soaring inflation could trigger interest rates to rise sooner than expected to control the rise in prices and stop the economy from dangerously overheating. 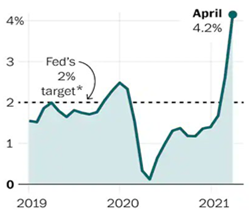 For months, the broad consensus among economists has been that inflation would spike as economies began to recover, however, there are currently two views on the direction inflation will take over the medium to long term. One camp the inflation hawks, argue that the combination of government support packages driving consumer spending and stretched supply chains have created a scramble for raw materials, meaning the jump in inflation may not be temporary and that rampant inflation could spiral out of control, thus crashing the global economy.

The inflation doves on the other hand argue that this spike in inflation will be short lived. For those of you that joined us for our March masterclass may remember that Dr James Watson explained the reasons why he believes that this level of inflation will be transitory, and the evidence so far seems to support this position.

The inflation surge can mostly be attributed to economies reopening. In simply terms demand has been artificially suppressed and supply chains have been disrupted for much of the preceding 12 months. So, it is obvious that a sudden unleashing of pent-up demand would cause supply shortages and price rises as the market works through the various bottlenecks and blips it inevitably faces in meeting a sharp uptick in demand. 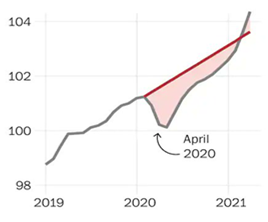 It is also helpful to consider where prices would be if the pandemic had never happened. The graph below shows that prices in the US are near where they would have been if they had grown at a steady 2% during the pandemic. It is highly likely that the Federal Reserve (US Central Bank) will be relaxed about inflation and expect it to pass through the system in a matter of months. Another indication of the Fed’s lack of concern is that many economists think that interest rates in the US will be kept at their current ultra-low levels until at least 2023 to ensure that the recovery from the pandemic is strong and robust.

It is worth remembering that it is only two short years ago (before the pandemic hit) that the fear among investors was that we were heading for a sustained period of secular stagnation (chronic long term low economic growth and demand) and the debate was how to boost demand and growth. The market likes a narrative, in 2019 it was secular stagnation, in 2021 it is inflation, it is anyone’s guess what the story will be in 2022. As we are all aware markets are unpredictable and extremely complex so we as market participants find it comforting to create stories to help us deal with these unknowns.

It is still early in the recovery to be fully confident on which direction markets, economies and inflation will take in the coming year. However, the pandemic has brought on a noticeable shift from monetary to fiscal policy being the main driver of markets. After the 2008 financial crisis global markets became pre-occupied by the decisions of central bankers, with the direction of financial markets being determined almost entirely by the actions of central banks. Quantitative easing and rock bottom interest rates helped create a boom in markets that lasted for over a decade. During this period, the words of central bankers carried far more weight to investors than the words of global leaders. So, while it could be argued that we experienced asset price inflation in the post 2008 period this never translated to a spike in consumer prices. Now that monetary policy is taking a backseat to expansive fiscal policy investors and markets will in the future turn to governments rather than central banks for support on market down days.

A more interventionist approach by governments may well see them do more to encourage investment in skills and new technologies. Over the last 10 to 15 years businesses have been reluctant to invest even with a global glut in savings at their disposal and low interest rates. If our economies and incomes are to grow, then businesses must be encouraged and even incentivised to invest and boost productivity. In tandem to this there is room for fiscal spending on infrastructure improvements and green industries to be greatly increased as the risk of unleashing high inflation are low.

Fundamentally the fear of inflation could be viewed as a positive story as the underlying driver of the inflation fear is the rapid economic recovery that investors are expecting. The odds are high that by this time next year more jobs will have been created, the economy will be back to its pre-pandemic size, businesses will be growing and while inflation may be higher people’s incomes should more than keep pace.

Read the latest from our blog...

Fixed interest in a rising interest rate environment. Bonds are viewed as being far less exciting than their close financial brethren: shares.

Find out more about Let’s talk about Bonds

A step in the right direction…

If the last 2 years have taught us anything it is that pandemics and wars are not relics of history. It is remarkable that despite the scale of each event markets have taken them in their stride and are in fact up over two years.

Find out more about A step in the right direction…

In an uncertain world, there is always a risk that you will bump into someone you know, even in the most unlikely circumstances – but that’s not always a bad thing!

Find out more about Double Jeopardy

Keep Calm and Carry On (Once Again)

It feels unequivocally unfair and tragic that in the same week we began to move on from the global pandemic that had marked the course of our lives for the past two years, we’ve walked headfirst into the makings of a world war.

Find out more about Keep Calm and Carry On (Once Again)